An American Bully is a type of dog that many people believe to be a Pitbull. The similarities between the two breeds are hard to tell apart and often lead to confusion.

In this article, we will discuss if these two dogs are one and the same or not, what sets them apart from each other, and how you can spot the differences!

There are many more differences between the two breeds, so keep reading to learn more about the breeds and I promise by the end of this article you will learn the difference between them.

Is An American Bully A Pitbull?

American Bullies and Pitbulls are two different breeds but I totally understand why you might confuse them, they do have some similar features such as their nose, eyes a little bit, and finally, their mouth is also kinda similar as well, but they do have more differences than similarities.

In order to understand each breed, we need to learn more about their origin and why do they look like each other, so let’s start with the American Bully.

American Bullies were created over the years by breeding the American Staffordshire and the American Pitbull Terrier and they added other Bullies during the breeding process.

They were bred to have a more muscular body as well as larger bone structure.

Also, their coat was created from the American Staffordshire Terrier and Bulldog breed which is why they have wrinkles on their face just like those breeds.

In this way, we can say that an American Bully has many similarities with Pitbulls but they are not the same breed.

The Pitbull Terrier was first bred in England and was used for bull baiting, which is a very cruel sport where dogs were set against bulls or bears to attack them.

Bull baiting was banned in 1835 by the British Parliament, so dog owners started having their dogs fight against one another; this is how the sport of dogfighting came into existence.

Pitbulls were then brought to America and became popular as family pets because they are very loyal, loving, gentle, and protective with children. Pitbulls are also great with other pets such as cats. You can learn how good are Pitbulls with cats here and how you can help them get along better.

Needless to say that Pitbulls history has some dark parts such as dogfighting, but that doesn’t mean all Pitbulls are aggressive.

Now you know a little bit more about their history and why they look similar to each other.

The Differences between American Bullies and Pitulls

Now that we understand more about their breeding and history, let’s move on to the physical differences between these two breeds.

As we mentioned before, American Bullies were bred to have a more muscular body and they usually weigh more than Pitbulls.

Their chest is also wider and their head is shaped differently as well.

Finally, they both have a boxy body but the Pitbulls’ is more lean than an American Bully because of their muscle definition.

This was just a quick list of some physical differences between these two breeds so let’s go through them in more detail.

American Bullies are bred to have more muscles and they usually look more bulky than Pitbulls.

Their chest is wider, their head is shaped differently, and you can easily distinguish them from Pitbulls by their floppy ears.

Pitbulls, on the other hand, are bred for agility and speed rather than strength so they usually have a leaner body with more muscle definition. Their ears are mostly cropped, and they are known to be very protective of their family.

In conclusion, American Bullies and Pitbulls are two very different breeds, but they do share some common features.

If you’re still not sure which one is your dog or someone else’s, don’t worry because there are many other physical differences that can help to tell them apart such as their head shape, muzzle length, and tail shape.

Now that we’ve looked at their physical differences, let’s move on to the temperaments of American Bullies and Pitbulls.

Both breeds are known to be very loyal and protective of their family but American Bullies are a little bit more aggressive than Pitbulls.

In general, Pitbulls are not as aggressive as people think they are but American Bullies should always be supervised around small children just to be safe.

Pitbulls, on the other hand, are known to be gentle with kids and they don’t like seeing them sad or upset.

American Bullies can also make great family dogs but their temperament depends on how well you train them since they were originally bred for dogfighting.

Are American Bullies Harder To Train Than Pitbulls?

Now that we’ve covered some of the physical and temperamental differences between American Bullies and Pitbulls, let’s talk about how they compare when it comes to training.

Pitbulls are easier to train than American Bullies because their temperament was originally bred for dog fighting .

American Bullies, on the other hand, can be a little harder to train because of their history as well.

It’s important to start training your dog from an early age and to always be consistent with your commands.

You should also make sure that you are using positive reinforcement when training your dog so they don’t get confused.

Pitbulls, on the other hand, are known to be very intelligent and easy to train if you learn how to build a strong bond with them from an early age.

Finally, it’s important to remember that every dog is different and some American Bullies are easier to train than others.

Another difference between American Bullies and Pitbulls is how much grooming they need.

American Bullies only require a little bit of grooming every few months while Pitbulls need to be groomed at least once a week .

Both Breeds have short hair and don’t shed as much as other dogs, and they need little maintenance to keep their coats clean and fresh.

You should always brush their hair at least once a week to prevent it from getting matted, and you can also give them baths every few months when they get dirty.

If your American Bully has longer fur on their face or legs, then you will need to pay extra attention while grooming them.

You’ll need to brush their face every day, bathe them more often, or shave the longer hair on their legs.

Pitbulls are known for having very short clipable coats that don’t require much maintenance at all.

The last difference between American Bullies and Pitbulls is how much exercise they need.

Both breeds need around 30-60 minutes of exercise per day but American Bullies need a little bit more than Pitbulls.

This is because American Bullies were originally bred for dog fighting and they need more exercise to stay healthy and happy.

In general, both breeds are very active dogs and you should make sure to give them enough exercise every day .

A daily walk around the block or a game of fetch in your backyard is usually enough to keep them happy and healthy.

Pitbulls, on the other hand, are known for being very muscular dogs with high energy levels so they need regular exercise every day as well.

Both breeds make great jogging partners but American Bullies are a little bit more suited for this type of exercise.

The final difference between American Bullies and Pitbulls is the price.

American Bullies are more expensive than Pitbulls because they are a newer breed and there aren’t as many of them around.

Pitbulls, on the other hand, have been around for centuries and are much cheaper to get.

This doesn’t mean that American Bullies are better dogs than Pitbulls, it just means that they are a newer breed and the demand for them is higher.

If you’re looking to buy an American Bully, you should expect to pay anywhere from $2000 – $5000 depending on the breeder and the pedigree of the dog. If you are willing to buy something a bit more exclusive and rare, check out this guide to the Merle Blue here.

However, if the American Pitbull isn’t purebred, they are going to cost way less between $500 – $800.

Yes, American Bullies are known for being more protective than Pitbulls because they were originally bred to be guard dogs. This doesn’t mean that all American Bullies will be protective of their family and property, but it is something to keep in mind if you’re looking for a dog that’s going to protect your home.

No, American Bullies and Pitbulls are both great family dogs and they will love spending time with your kids. However, you should always be careful around any dog breed and never leave your kids unattended around them. Both breeds are known for their high energy levels when they’re around kids. They certainly can catch your eye. With their unique coats, strong looks, and piercing eyes, a Merle Bully looks unlike other dogs in many ways, but what are merle bullies exactly? Are they recognized? are they healthy? And more importantly, should you consider getting one? So, what is a Merle Bully? A Merle Bully is… You’re not the only one who has just lately learned about the Exotic Bully. This dog breed was created in 2008, making it relatively new. Due to their striking resemblance to their nearest relative, the American Bully, many people get confused. The Exotic Bully does, however, exhibit a blend of characteristics from other Bulldog breeds,… 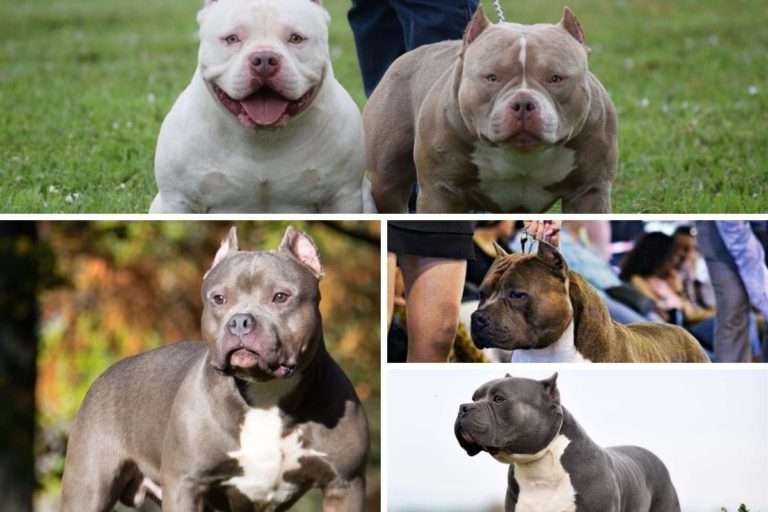 American Bullies have gained a lot of popularity in the United States and around the world despite being a relatively new breed. That is because these dogs are bred to be smart, energetic, loyal, and friendly which makes them a great addition to any family If you plan on adopting or purchasing an American Bully,… Merle dogs are known for their unique coats. They have an irregular pattern in their coat in the form of patches or swirls that come in different colors.  Owners of dogs that have a merle coat often wonder if they can register their dog in the American Kennel Club. In this article, we are going…