If you have a Pit Bull, you’ve seen it burrowing or sleeping under the covers at some point. While watching dogs burrow under the covers is one the cutest things, it often leaves their owners about the reason behind this kind of behavior.

Do Pit Bulls Like to Sleep Under the Covers?

Pit Bulls like to sleep under the covers as they instinctively burrow, which stems from the fact that they’re usually born in small, confined dens.

You’ll notice that your Pit Bull often likes to be wrapped in a blanket or frequently sleeps under the covers as it replicates the same feeling of comfort and safety that they had when they were born.

However, you shouldn’t wrap your dog in a blanket if it’s unwilling, and make sure not to wrap them too tightly as they might not be able to get out on their own.

Why Do Pit Bulls Sleep Under the Covers?

The burrowing behavior of Pit Bull might be confusing for many owners as they don’t always understand the reason behind it.

Pit Bulls burrow or sleep under the covers for various reasons, so let’s break down these reasons in more detail:

They’re Acting on Their Burrowing Instincts

As mentioned before, Pit Bulls have a natural instinct to burrow, which stems from the fact that they’re often born in dens that are small and confined.

So, this natural instinct will cause them to seek to be in small, confined places, such as under the covers, in order to feel as comfortable and safe as they were when they were born.

They’re Feeling Cold and Want to Get Warm

Pit Bulls cannot tolerate cold temperatures because they have one-layered coats with short hair, which doesn’t provide them with enough insulation. So, they tend to sleep under the covers more often when it’s cold as they’re trying to keep warm.

If your Pit Bull is cold and doesn’t try to sleep under the covers when it’s cold, it might be a good idea to wrap it in a blanket to warm it up yourself, so it wouldn’t be at risk of developing many health problems.

Some of the signs that your Pit Bull is cold include loud whining, excessive shivering, severe lack of energy, lifting its paws off the floor, refusing to go outside, and seeking out the warmest areas in the house.

Pit Bulls are sensitive dogs, and they might start to feel anxious or scared in certain situations. This will cause them to sleep under the covers as it will give them a sense of comfort and security that will help them cope with their anxiety or fear.

Suppose you notice that your dog is burrowing or sleeping under the covers because it’s anxious or scared. In that case, it’s highly recommended not to try to take the cover away from them as this will trigger them even more and might escalate their behavior to aggression.

It’s also essential that you can tell when your dog is feeling anxious or afraid and understand its cause so you can remove the trigger and help it cope properly.

Some of the signs that your Pit Bull is feeling anxious or afraid include trembling, panting or drooling, lack of appetite, loud whining, hiding, cowering, stiff posture, avoiding eye contact, and pacing.

They Want to Cuddle with You

Pit Bulls tend to form strong bonds with their owners, and they will treat them as members of their pack. They will try to show affection by being close to their owners and cuddling with them whenever possible.

So, your Pit Bull is very likely to join you to cuddle if you’re under the covers in bed because it simply wants to be near you. It might also choose to sleep under the covers when you’re not there because they smell like you.

So, they will often paw at blankets to create a nesting area or sleep under the covers when they’re in heat or in labor in order to feel comfortable and safe. In this guide to the Pitbull heat cycle, you can learn more about how your Pitbull behaves while in heat.

They might also keep their favorite toys close to them in the nesting area or under the covers.

Should You Be Concerned That Your Pit Bull Sleeps Under the Covers?

You shouldn’t be concerned that your Pit Bull sleeps under the covers as long as you know why it’s doing so.

Upon reviewing the previously listed reasons, you’ll notice that most of them are perfectly natural and valid, as Pit Bulls like to sleep under the covers because they’re following their instincts. They want to feel comfortable and safe.

However, if you notice that your Pit Bull rarely comes out from under the covers due to severe anxiety, then you will need to take it to a vet to find the reason for its anxiety.

You will need to help your dog become less anxious and find alternative ways for it to cope without having to stay under the covers all the time or at least reduce the amount of time it spends there.

Should You Let Your Pit Bull Sleep Under the Covers in Your Bed?

There are mixed opinions when it comes to whether you should let your Pit Bull sleep under the covers in your bed.

Some dog trainers believe that it’s better to have the dog sleep in its crate or its not own bed as it teaches it to respect the boundaries of its owner. There are also some risks to letting your dog sleep under the covers, such as overheating or suffocating.

Other dog trainers, on the other hand, believe that there’s no problem with letting the dog sleep under the covers in your bed as long as you keep an eye on it and its presence in bed doesn’t bother you in any way.

It mainly depends on your personal preference and the dog’s training. It can also depend on how clean your dog is, as you shouldn’t let the dog sleep under the covers in your bed if it’s too dirty.

Will Pit Bulls Get Overheated If They Sleep Under the Covers?

Pit Bulls will get overheated if they sleep under the covers, which could lead them to develop a fever and other health problems.

Just like humans, staying under the covers for an extended period of time will cause dogs to feel hot to the point of overheating, especially since they cannot regulate their body temperature on their own.

To prevent your dog from overheating when it’s sleeping under the covers, you need to make sure the blanket is not made from heavy materials and that your dog can move freely to get out from under it.

Will Pit Bulls Suffocate If They Sleep Under the Covers?

Pit Bulls have short snouts, which cause them to have some trouble with breathing normally. If they sleep under the covers without enough room to breathe, they will be at risk of suffocating.

To prevent your dog from suffocating when it’s sleeping under the covers, you need to make sure that the covers aren’t made from heavy materials so that they wouldn’t inhibit the dog’s movements.

How to Stop Your Pit Bull from Sleeping Under the Covers?

If your dog insists on sleeping under the covers in your bed specifically and that bothers you, you need to gently discourage its behavior by removing the cover from the bed and commanding it to leave.

It’s also recommended to place an old blanket that’s carrying your scent in the dog’s bed or crate as an alternative since dogs often need the covers to feel safe and comfortable.

Avoid using harsh discipline methods when discouraging your dog from sleeping under the blanket, as this will cause it to feel more anxious, and keep in mind that you need to help them adjust gradually.

How Do Pit Bull Show Affection?

Pit Bulls show affection in many ways, including leaning on you, sitting on your lap, running and jumping when they see you, wagging their tails, licking your face, following you around, cuddling with you, bringing you their favorite toys to play with, and most importantly protecting you from anything they perceive as a threat.

Why Do Pit Bulls Feel Anxious?

Pit Bulls feel anxious for many reasons, such as being in an unfamiliar environment, meeting strangers, having others intrude on their territory, not getting enough attention from their owners, and getting startled by loud noises. You need to determine why your dog feels anxious to help it cope better.

How to Help Your Pit Bull Sleep in Its Crate?

To help your Pit Bull sleep in its crate, you need to place the crate in an area where your dog feels safe and avoid locking it so that it won’t feel too isolated. You can also place some blankets inside the crate to keep it warm and comfortable, as well as some of the dog’s favorite toys to make it more inviting.

Depending on their age, Pit Bulls can stay alone for 2 to 6 hours. If they were left alone for too long, they might develop separation anxiety which will cause them to become destructive or even aggressive. It’s recommended to ask someone to stay with your dog to watch over it instead of leaving it alone.

Sleeping under the covers won’t suffocate your dog

Ask A Vet: Why Does My Dog Like To Sleep Under The Covers? 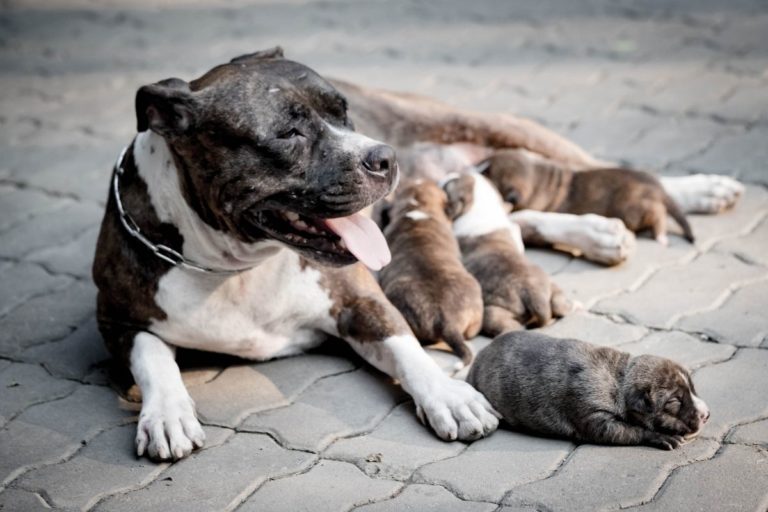 The Pitbull breed is one of the most popular dog breeds in the United States and it is sought after by many families. There are many variations of Pitbulls with similar characteristics. However, if you’re looking to get a unique dog, then you should consider getting a brindle Pitbull. So, what is a brindle pitbull?… 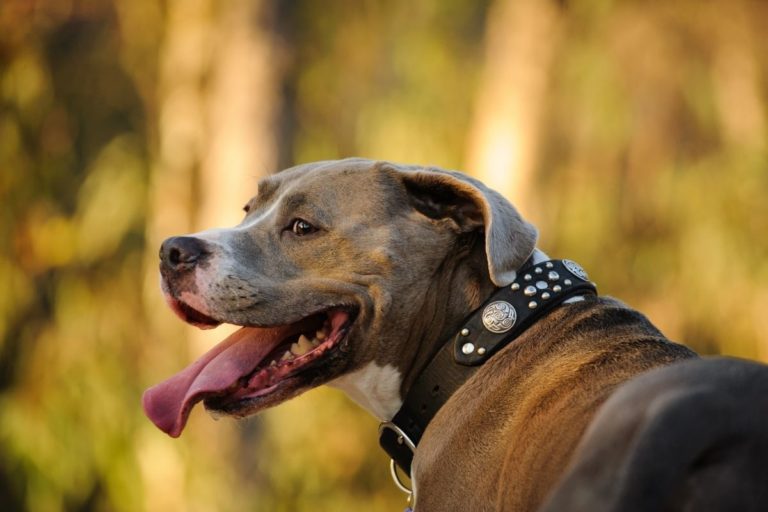