Pitbulls have different types of tails that vary in shape. It’s common for a Pitbull to have a straight tail or a wrapped tail. However, there’s a type of tail that’s very rare which is the long tail.

So, do Pitbulls have long tails? Some Pitbulls do have long tails due to their bloodline but it’s very rare and it’s mostly considered a fault as it doesn’t fit the official breed’s standard. However, this type of tail can still be good for the Pitbull as it’s very flexible which makes it a lot easier to move or wag around.

Keep reading to learn more about the main types of Pitbull tails, why they’re sometimes cut off, and how to take care of your Pitbull’s tail.

What Are the Main Types of Pitbull Tails?

There are 3 main types of Pitbull tails which are straight, wrapped, and long. The type of tail a Pitbull will have will mostly depend on the dog’s bloodline.

Now, let’s take a closer look at the characteristics of each type of tail:

This type of tail is also known as the pump-handle tail because of how it’s shaped. It’s short, low hanging, and tapers down to the point giving a triangle-like shape.

It’s the most sought after by Pitbull owners as it fits the official breed’s standard which qualifies the dog to participate in dog shows and competitions.

This type of tail is also known as the corkscrew tail because of how it’s shaped. It’s sloped downward and wrapped so tightly at the base that it doesn’t extend upwards at all.

In Pitbull puppies, the tail will appear wrapped but it will be flexible enough to move. However, in Pitbull adults, the tail will stiffen into a hard shape which makes it impossible to move or clean.

While it doesn’t necessarily fit the breed’s official standard, it’s still popular among many Pitbull owners because of its cute appearance.

This type of tail is also known as the wavy tail. It’s longer in length and a lot more flexible compared to the other two types.

It’s very rare and it’s mostly considered a fault as it doesn’t fit the breed standard, however, it can still be good for the Pitbull to have as it can be moved and wagged easily. It’s also easier to clean.

Are Pitbull Long Tails Cut Off?

Pitbulls with long tails often get their tails cut off or cut short in order to make them conform more to the breed’s official standard.

This procedure is known as tail docking and it’s performed by a trained veterinarian usually right after the dog’s birth and sometimes when the dog is older.

During the procedure, the dog will be put under anesthesia and the veterinarian will use surgical scissors to cut off the dog’s tail or tie a rubber band around the tail’s base to stop blood flow which causes the tail to fall off.

Even though tail docking is often done for cosmetic purposes to get the dog to the breed’s official standard, it’s illegal to do so in the United States and it’s more commonly done at the recommendation of a veterinarian to prevent or treat some of the health issues associated with the dog’s tail.

The recovery time for the procedure will mainly depend on the dog’s age and the reason its tail was docked.

What Are the Health Problems Associated with Pitbull Tails?

The most common health problems that Pitbulls might develop because of their tail are skin infections.

That is because the area underneath the dog’s tail can be very difficult to clean, especially for Pitbulls with wrapped tails.

This will cause dead skin, dirt, grease, and bacteria to accumulate in the area which will eventually lead to the development of infections and other severe skin conditions.

Symptoms of infections in Pitbulls include red swollen skin around the tail area, severe itchiness, and a distinctive bad odor

How to Take Care of Your Pitbull’s Tail?

It’s very important to take care of your Pitbull’s tail by cleaning it and the area around it regularly to prevent any accumulation of dirt and protect your dog from infections.

To clean your Pitbull’s tail, you can use a soft cloth soaked in warm water and some dog-friendly shampoo to wipe the tail down. You can also use wet wipes that don’t contain any fragrances or harsh chemicals to avoid causing skin irritation

What’s Are the Main Breeds of Pitbulls?

Is It Legal to Dock Your Pitbull’s Tail?

It’s illegal to dock your Pitbull’s tail in the United States but only if it’s done for cosmetic purposes. This procedure can be very painful and stressful for the dog, so it should be done at the recommendation of a veterinarian to treat or prevent any medical problems associated with the dog’s tail.

How Much Does Docking a Pitbull’s Tail Cost?

Docking a Pitbull’s tail costs an average of $10 to $20. The cost of the procedure will mostly depend on the dog’s age and the reason for docking its tail. There are also some additional costs for the dog’s medication and any veterinarian check-up visits during its recovery period.

What Are the Common Health Problems in Pitbulls?

Common health problems in Pitbulls include allergies, hind leg problems, eye diseases, cerebellar abiotrophy, parvovirus, various skin conditions as well as obesity if they don’t eat a healthy diet and get regular exercise. So, make sure to take your dog to a vet for regular checkups to ensure it’s in good health. 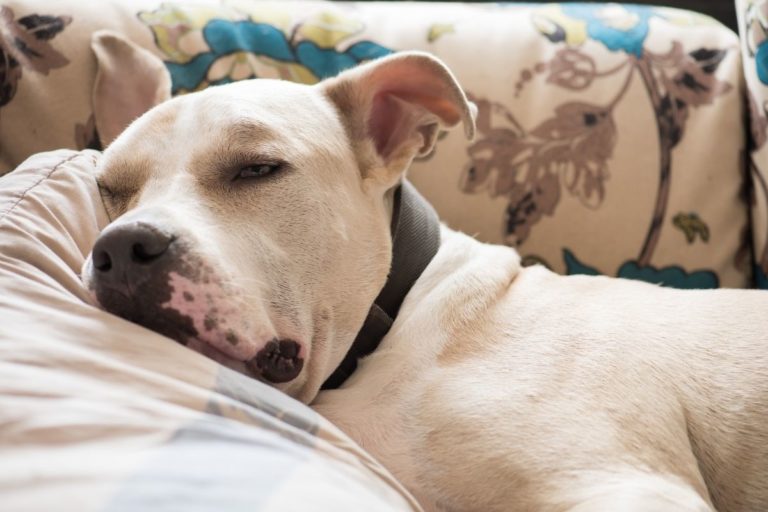 When it comes to sleep, I need you to think of your Pit Bull as if they’re a teenager. Sleeping is basically a sacred ritual. They sleep most of the day, but when they’re up, they’re menaces. Do Pit Bulls sleep a lot? Pit Bulls do sleep a lot especially compared to humans. On average,… Pitbulls will pant and breathe heavily for various reasons which can be concerning for many pet owners. Most of the time, heavy breathing is nothing to worry about as it could be a result of your dog playing too hard. However, there are some cases in which heavy breathing might be a symptom of a… 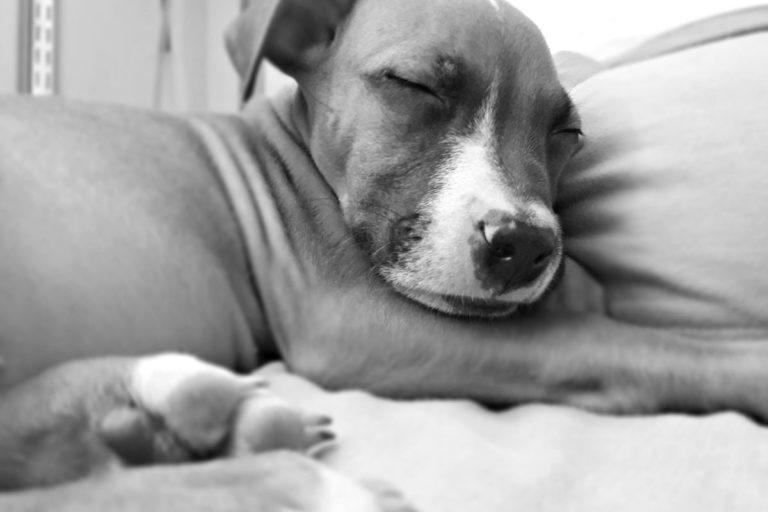 There are many Pitbulls that sleep with their owners. It is a very common question as to whether or not it is safe for them to do this. In this article, we will discuss how sleeping with your Pitbull can affect the health of you and your pet. We will also cover some tips on…