Pit Bulls are not considered expensive compared to other dog breeds. In truth, they are considered to be low to moderately priced dogs.

On average, a Pit Bull dog can cost between $800 to $1600 depending on the breed and the breeder you buy from. But certain factors such as registration, color, and size can play a role in increasing the price.

So, how much is a black Pit Bull? A black Pit Bull can cost anywhere between $2000 to $25000. Pit Bulls with black coats are very rare, and in reality, no Pit Bull has absolute black fur only. Dog owners consider mostly black Pits to be extra special; that’s what makes them pricey.

Keep reading to learn what’s special about black Pit Bulls and what makes them so expensive.

How Much Is a Black Pit Bull?

Usually, buying a Pit Bull from a reputable breeder will not cost you more than $1600 at most, but the second you specify the color of the Pit Bull as black, that price will skyrocket. A black Pit Bull can cost you anywhere between $2000 to $25000!

This price bracket is so big because the king of registration your dog comes with will also determine the price range.

Why Are Black Pit Bulls Expensive?

Black Pit Bulls are the result of breeding an American Pit Bull Terrier with a Staffordshire Pit Bull Terrier. And technically, the only reason they are so expensive is that people believe they are rare and hard to find.

Most black Pit Bulls are not completely black. They usually have a bit of white or gray hair somewhere, but the less visible that bit of non-black hair, the more expensive the Pit Bull will be.

Are There Absolute Black Pit Bulls?

Black Pit Bulls are striking to look at and might be somewhat scarce, but they are not actually rare. Unfortunately, many breeders would lead new owners to believe that black Pit Bulls are rare just to make them pay more money than they’re worth.

What Is the Rarest Pit Bull Color?

Obviously, some colors are rarer than others and, therefore, cost more money to obtain. However, the color of your Pit Bull does not affect their behavior or temperament or anything about them whatsoever.

Since colors affect the first impression, let’s take a look at some rare Pit Bull colors:

Blue Pit Bulls or Blue-nosed Pit Bulls are very rare and sometimes considered the rarest Pit Bull colors. The color blue can be found in the Pit Bull’s eyes or nose, but its coat isn’t really blue.

They have a sticking white coat, and you can easily see their muscular build due to their light color. White Pit Bulls have a versatile range of eye colors from black, brown, and red to multi-colored eyes.

Also known as red nose Pit Bulls, Red Pit Bulls are one of the most expensive Pit Bull breeds.

Their coat color varies between red, brown, fawn, and brindle color, and their nose, eyes, toenail, and lips sport a red color. They’re a bit more aggressive and hot-tempered than other Pit Bulls. You can check out my complete guide to brindle pit bulls here.

Tri-color Pit Bulls are a mix of different colored Pit Bulls that produce a Pit Bull with 3 colors in their coat. The mix can be any Pit Bull colors together as long as they are 3.

This breeding technique is still new; that’s what makes these Pit Bulls rare and sought after.

There are many other colors for Pit Bulls, such as beige, brown, gray, and a multitude of mixes between colors.

The PiBull’s coat color has no effect on their temperament or behavior, but among breeders and owners, they tend to prefer some colors over others. This preference is what makes black Pit Bulls as expensive as they are.

What Is the Most Expensive Pit Bull?

How Much Is Black Panther Pit Bull?

How Much Is a Blue Nose Pit Bull Worth?

A blue nose Pit Bull can cost between $1000 to $3000. They are in high demand and can be hard to find among breeders, which makes their prices surge. Even though White and Tri-colored Pit Bulls are much more expensive, blue nose Pit Bull is still considered very expensive for a Pit Bull.

What Is a Merle Pit Bull?

A Merle Pit Bull is a Pit Bull with the merle color mutation. This mutation causes dogs to have spots and swirls of different colors on their coats. It’s a very rare mutation and makes the Merle Pit Bull a rare Pit Bull to find or obtain. 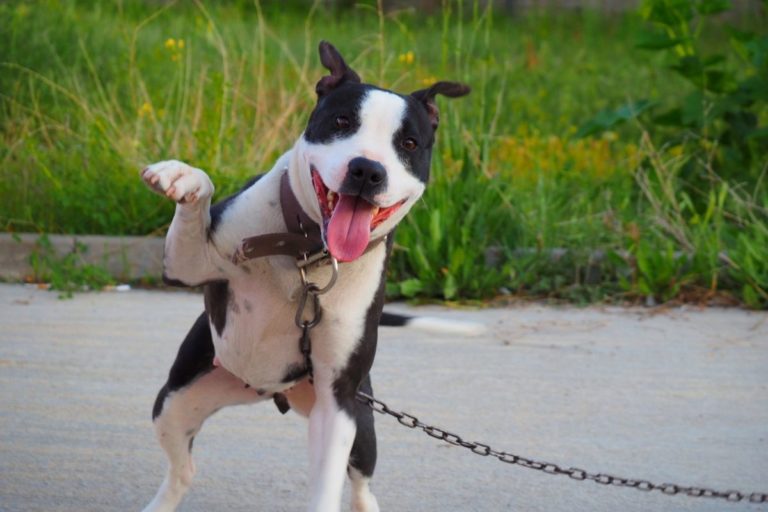 Pitbulls are energetic dogs by nature, and it doesn’t help when their normal energy is multiplied by their need to find a mate.  This leaves many Pitbull owners wondering what they can do to calm their pitties, even for just a little bit. Many experienced dog owners recommend neutering or spaying the dogs, but does… Do you have a Pit Bull that you expected to get a broad chest and a big head as they usually get, but found out that it didn’t exactly fill up as it should? No need to worry about your little boy’s health as it’s absolutely normal! Why is my Pit Bull’s head so small?…